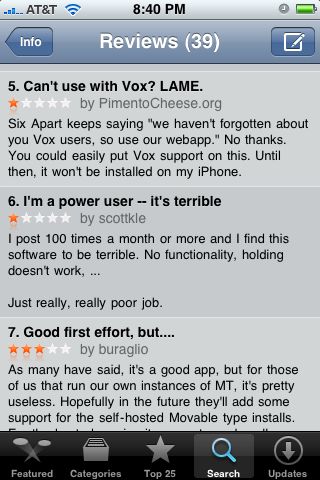 That’s the first impression I received after browsing through the reviews of Six Apart’s iPhone App on iTunes.

While many were upset that a TypePad account would cost them 495 pennies a month, others seemed upset that this app would not work on Movable Type (or even Vox) despite the obvious indication that this is a TypePad only app.

Childless whining aside, I decided to submit my credit to Six Apart, and test this iPhone App for myself. 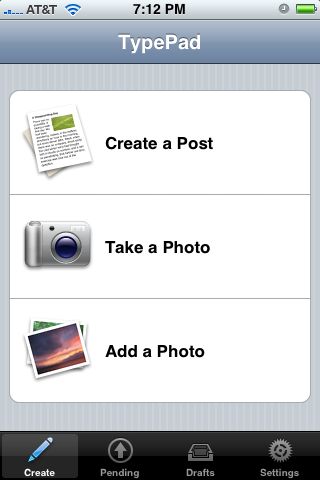 One of the things I enjoyed about this app is the ease in which I was able to write a post.

Whether it was writing a post or inserting an image (note: which posted in high quality by the way), TypePad’s iPhone interface was very intuitive, and should be easy to use whether you are a newbie or a pro. 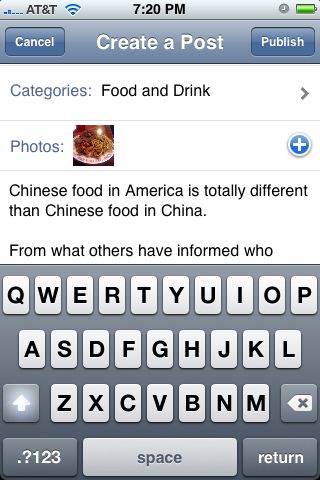 Adding categories was also very easy as well, and I enjoyed the way you could hook up your Twitter account (which notifies your friends of a new post). 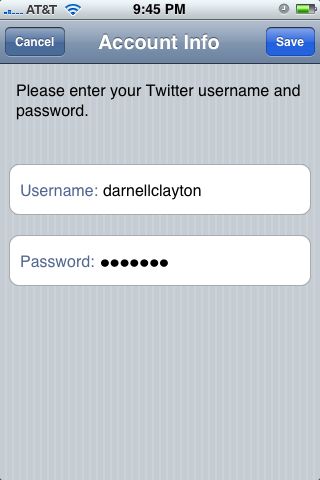 While writing a post was easy, uploading it to your site was very sloooow.

This problem is compounded by the fact that you have to keep the app open, otherwise it will not upload (which means that if you are interupted by a phone call, you have to start the whole process again). 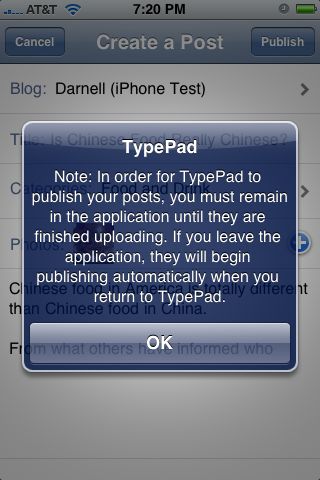 Last (but not least), users are unable to edit previous posts that were published, a missing feature one would expect from a third party company (and not from the original creators).

This is a pretty good app, which TypePad users will probably enjoy using.

The app is free, although users will have to pay $4.95 a month in order to use the TypePad account.

Hopefully Six Apart will continue adding features to this app, as it could become a killer mobile blog application (especially if they find some way of inserting audio, since you are already paying for the account anyways).

This post was originally written on the iPhone, with some brief editing via desktop for clarity (and arranging images).