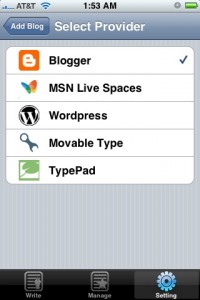 Despite providing powerful platforms for their users, both Blogger.com (owned by Google) and Six Apart seem to be rather slow when it comes to creating apps for the iPhone.

While SixApart has provided an iPhone app for Typepad, they have yet to develop anything for MovableType, leaving the field wide open for third parties.

One company from China however is taking advantage of this opening, by creating a powerful iPhone app for not only the “big three” (Blogger, MovableType/Typepad, WordPress) but for MSN Live Spaces as well.

Called BlogPress (which was previously highlighted by Andy), this app was developed by CoolLittle Things, who ironically encountered some resistance (note: english translation over here) submitting their app to the iTunes store.

But with BlogPress costing a whopping 999 pennies (or about $10 USD), BlogSpot and MovableType fans may wonder whether purchasing this app is worth it.

So instead of spending potential gas money (or even lunch), you might want to check out the review below to see if this iPhone app is worth spending money on. 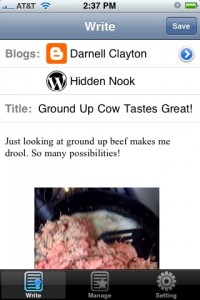 There were a lot of things I enjoyed about this app, the first being able to publish both images and text together on a single post.

I could even insert multiple images together, with text either above or below the image, a feature that will excite Blogger fans (as the mail-to-blogger feature only posted text below the single image on the iPhone).

Users can also edit previous entries, as well as save drafts (a deal breaker for mobile blogging if you ask me).

Even better, if you are interupted by a call, your post is automatically saved (note: unfortunately there is no pop-up confirmation informing you that your post was saved, although it did pass with flying colors after I tested it).

The other cool feature was the ability to post to multiple blogs at the same time–even on different platforms! (a useful feature if you have want to post a quick message across all of your blogs).

Last but not least, Blogger users will appreciate the fact that BlogPress uploads their images to their Picasa Web Album account, with the option of selecting which album the images will be uploaded to (as each Blogger blog has its own album).

While this app was very powerful, it did encounter a few bugs/problems.

When one scrolls down to the bottom of the screen (after typing in a post), it is hard to scroll back up at the top.

Second, images posted to Picasa had a tendency to “flip upside down.” This may be an error on Picasa’s end (as you can easily fix them by flipping them right side up), but either way some users may find that to be a bit irritating.

There is also no way to resize the images posted, although that may have something to do with Picasa’s settings (and not via BlogPress).

Last but not least, BlogPress only uploads images to Picasa Web Albums, which may not please those wishing for the images to remain on their servers (or on another platform, like WordPress.com or MSN Live Spaces).

So, is this app worth purchasing? If you are a blogger fan, then the answer is yes!

The only thing missing from this app is the ability to add labels and adjust the posting date, but aside from that this app is probably what most BlogSpot users have been waiting for.

As far as MovableType goes, this app may hold you over until Six Apart develops an official iPhone app, unless you do not mind your images being hosted (for free) by the search engine king.

Note: For some strange reason Apple has not included BlogPress in its search index (as of this post), although you can download it by clicking here (link will open up iTunes).