If there was one company determined to dominate the mobile blogospher 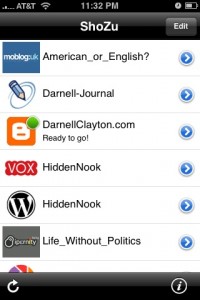 e, it would have to be ShoZu. Connecting with almost 350 different mobile devices, ShoZu is enabling bloggers (regardless of their phone type) to post from their phone (and away from their computer).

ShoZu connects to not only the traditional platforms (such as Blogger, TypePad, WordPress, LiveJournal, and Windows Live Spaces) but also the unfamiliar (like Netlog, freewebs, Multiply and even Six Apart’s Vox.com).

While ShoZu has always had an iPhone app for users to test out since the birth of the app store, I decided to give it a second look after hearing about the numerous improvements regarding this iPhone app (with most of them being positive). 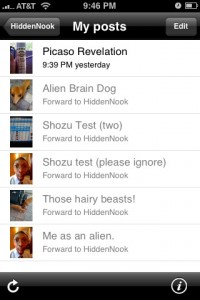 One cool feature that made ShoZu stand out from the “iCrowd” was the fact that it saves your past entries, allowing you to publish the same exact post to a different blog on an entirely different platform.

Users can also post text and images together, with images posting in fairly good quality. You can either post an image in web quality (which is 640 x 400) or full quality (1600 x 1200), the latter being only available if you take a picture (instead of uploading from a previous photo album).

You can also geotag your posts as well (although I would not recommend that feature for ladies–especially in this day and age).

While I was impressed with ShoZu overall, I did encounter a few issues while using this iPhone app–one of them which was a deal breaker (and deal breakers end up being deleted from my iPhone).

The first was the size of the image posted. While the images themselves were uploaded to ShoZu’s servers in good quality, the image size on the blog post was surprisingly small.

I do not know whether or not ShoZu is trying to preserve bandwidth by reducing the image size on a blog post, but regardless of the reason bloggers may not appreciate the “puny” image postings on their weblogs.

The second item (which was a deal breaker for me) was a small bug within the app that kept the keyboard up long after I had submitted a post to my blog. The only way to get rid of this keyboard (which takes up half of the screen space) is by exiting ShoZu altogether.

Hopefully they will remember to add the “blue done button,” to close out the keyboard, as it would be sad to see a great app end on a sour note after begining with a very strong finish.

The ShoZu iPhone app is free, which in the day of rising energy prices is definately a good thing. If they are able to enlarge the size of the image displayed upon posts, as well as remove the ever so irritating “eternal keyboard” problem, I can easily see ShoZu competing with some of the major players–at least on the iPhone.