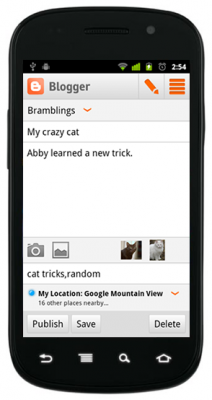 After watching rivals like WordPress reap the rewards of creating mobile apps, Google has finally decided to court the mobile universe by creating an official Blogger app upon Android.

While launching an Android app first wasn’t surprising, the Blogger team is apparently working on other mobile OS’s which means we might see an iOS Blogger app in the near future.

We are excited to announce our first version of the Blogger Android App. Using the app you can easily compose a post, attach a photo that you just took with your phone, and either save it as a local draft for later or immediately publish it to your blog. If you are an Android user, you can start using the Blogger app today by downloading it for free from the Android Market. […]

Note: this app is available only on Android devices but we are working toward supporting other smartphone platforms to allow more of our users to easily post to Blogger on the go. (Blogger Buzz)

Previously Google was content to let third party apps like Blogaway, Blogger-droid and BlogPress (the latter which is on iOS) represent them within the mobile universe, although after watching the success of rivals it looks like the Blogger team is now ready to court each mobile OS starting with Android.

Surprisingly the Official Blogger app lacks video uploading which a few of their rivals (i.e. WordPress, Posterous and Tumblr) as well as third party clients have baked within their respective Android apps.

When (not if) Google launches official Blogger apps upon iOS, Windows Phone 7 and Blackberry, hopefully the team will consider adding video support as well as comment moderation, the latter which can help blogspot fans squash spammers and trolls while blogging on the go.