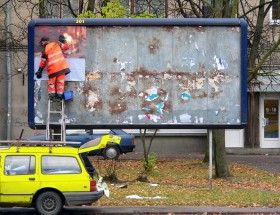 It’s the golden road for bloggers, it’s how every great writer is supposed to make his millions (or at least thousands) off the Web. You start up an awesome blog, write great content, build a good audience, slap up a few Adsense ads and let the money come rolling in.

While it’s a system that works great for some bloggers, for a vast majority it’s a road to nowhere. A select few get rich, a few more get some spending money and the majority never even see a check.

For most blogs, advertising is a terrible business model. For them, it doesn’t work, it can’t work and it never will work. It’s that simple.

I learned this the hard way myself years ago and I cringe as I was other bloggers go down the same path, usually falling flat on their face.

Why is advertising such a terrible business model? The reasons are painfully obvious when one takes the time to look for them, but few, blinded by the promise of easy money, see the reasons until they’re staring at their paltry earnings report.

Still, for those who want to know why this is a bitter truth, I’ve outlined five reasons below.

1. You Need a Lot of Readers

There’s no such thing as an average click-thru rate (CTR) for ads. Every industry, every site and every ad is different. There are simply too many variables to account for. However, in many circles a 1% CTR is considered pretty good. This means that you need to get 100 pageviews to get a single click. A site with about 1,500 pageviews, well above the “average” for a blog, especially a non-pro one, would get about 15 clicks. If a blog has 500 pageviews per day, it gets just 5 clicks. Etc.

However, many, if not most, blogs don’t optimize their ads well enough or target a strong enough audience to reach that level. Instead, they get a CTR well below 1%. That means those already weak numbers go down even lower.

Still, none of this would be a problem if it weren’t for the next fact.

2. Most Keywords Pay Nearly Nothing

A 2005 poll on Digital Point found that 75% of all Adsense users were paid an average of less than $.25 per click. While the data is old, it likely hasn’t changed drastically (though it probably has gone up at least some).

The truth is that some keywords are hot, most are not. If you write a well-targeted site that aims at very pricey keywords, you could be getting several dollars per click. However, most bloggers, at least according to reports, get much, much less.

If we use that $0.25 earned per click as a starting point. If you have a site with 1500 pageviews per day, well above the norm for a upstart blogger, and he’s getting 1% CTR, a pretty good return. He’s making a grand total of $3.75 per day (before discussing Google’s cut). While that is $112.50 in a 30-day month, it’s still nowhere near enough to live off of.

At these rates, you’d need probably 10x-50x the traffic to make your site remotely viable for even a significant portion of your income. That’s a lot of blogs to set up and maintain.

So, unless you are one of the fortunate few to have a pricey keyword attached to your site, you’re likely going to be earning pennies per click

3. Your Visitors Will Hate It

Though most visitors understand that ads are a necessary evil at times and don’t mind ones that aren’t intrusive or excessive, the simple truth is most visitors prefer a site without ads to one with ads. Some even go to the extreme of blocking ads.

This is worse when you start out with an ad-free site and then put ads on it. Visitors will notice and they will complain. How much depends on the site, but at the very least it cheapens the site and, in extreme cases, can be seen as a betrayal.

Basically, the day you put ads on your site is the day you go from solely serving your visitors to attempting to sell them to advertisers. Even those who understand completely and support you won’t look at your site the same way after that.

4. You Send Your Visitors Away

Most advertising online is paid per click. This means, in order to get any money from your ad, you have to wait for your visitor, which you worked hard to write great SEO-friendly content t earn, to click the ad and go away, likely never to return.

If you’re sure that they are going to come back or you know that a $0.25 (or less) is what they are worth, then this is fine. Otherwise, someone else is getting the lion’s share of the value from your visitor, the one you worked so hard to draw in.

While larger sites and well-established ones may be able to trust that visitors will return after clicking an ad, most blogs don’t have that luxury. As such, you’re selling your visitors to another site, which has proved that it can make more money from then what they are paying Google, which is what you are getting a cut of.

The pitch for putting ads on your site always sounds the same. Put ads on your site, earn money while you sleep, go on vacation, etc. While it’s nice to earn at least some money while brushing your teeth, as mentioned above that money is usually just a pipe dream. But, even if things do work out, it will, likely, be some of the hardest money you ever earn.

First, you have to be perpetually tweaking and adjusting your ads. Not only does a drop in CTR hurt your bottom line, but you also have to be vigilant against unwanted ads, such as those from your competitors or that might be seen as offensive.

Second, you have to be constantly writing high-quality content to attract both good visitors and good advertising keywords. It’s not enough to write engaging content that your readers will enjoy and search engines will find useful, you have to make sure to target keywords that will bring a reasonable amount of money.

Finally, companies generally consider advertising and other promotion as an unneeded expense and it’s among the first things to drop off in bad economic times (such as right now) and one of the last things to come back. Though Web advertising has been growing in the most recent numbers, the pace of growth is well behind the growth of the Web itself, meaning that each site if fighting for a piece of a pie that has to be cut more and more ways.

This competition can be brutal and does’t leave much room for even the most successful sites to rest on their laurels.

To be clear, advertising can and does work for many sites. Everyone can name dozens of sites that earn their living from advertising. But the reason we can name so many is because they are also extremely popular, one of the key requirements to making advertising work as a business model.

Most of these sites have traffic stats that blow the average blog, or even a well-trafficked blog, clear out of the water. While we all hear the tales of sites that earn thousands and even millions from advertising, we never hear about the millions of Adsense accounts that have never collected a check or the bloggers collecting pennies a day.

However, this article isn’t meant to sway bloggers away from trying advertising, at least not completely, but from going into it with pipe dreams of getting rich quick and earning huge checks easily. It’s not a matter of never trying advertising, but knowing that the odds are against it working without a huge stream of traffic.

So what is more likely to work? That’s a topic for next week’s column.