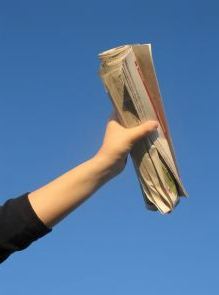 If you blog long enough and get enough traffic, you’ll inevitably find yourself on the mailing list for various companies that send out press releases. This moment comes with a strange mix of emotions as it is both annoying to be getting a lot of seemingly spammy email and flattering to be thought of as important enough to target.

However, as someone who came from a journalism background, I had been trained to distrust press releases. To many journalists, press releases are only useful for lazy reporters who don’t want to do their own reporting or can’t find out about news themselves. Instead of using the company’s press release, you were supposed to call and get your own quote.

But while that approach is certainly ideal, and maybe even practical for reporters at major publications, it certainly isn’t feasible for most bloggers. Not only do most of us lack the access to trivially call up a relevant company and get a quick response, but if we do the response is, usually, the exact same one in the press release.

The reason for this is simple. While companies want to engage bloggers and other thought-leaders, there’s just too many of them to sit down and answer questions from all of them. So, if you want to be alerted to the latest news in your field and have multiple viewpoints in your posts, you need to learn to stop worrying and start loving press releases. There simply is no other way.

The Benefits of Press Releases

As a blogger receiving press releases, they have three key benefits for you and your site:

In short, press releases are a great way to add an additional perspective and other information to a story. However, they are dangerous because of their inherent bias. After all, press releases are a product of a PR department and, as such, are going to be biased in favor of their sender and attempt to put them in the most favorable light possible.

As such, you have to be careful how you use them, but that’s no reason to shy away from them.

How to Use Press Releases Correctly

The problem with press releases, historically, has been that many lazy journalists would just copy and paste from them liberally to create their stories. While the companies sending the releases were happy to have their language used in such a manner, not only is this a form of plagiarism, but it also lets the bias of the press release through unfiltered.

The best way to use a press release is to treat it exactly the same way you would an interview you had performed with someone at the company. You can quote it, you can cite it and even reference facts in it, but always be clear about where you got the information.

When possible, you should independently verify any information given in the press release before treating it as simple truth and, when you can’t verify something, make sure you’re clear where you got the information from.

Finally, if possible, you should try to get quotes and information from those on an opposing side (if there is one). As usual, posting only one side’s views in an article, even if presented accurately, can be another form of bias. So, it’s worth your time to find a statement from a different viewpoint if at all possible.

If you can do these things, most likely, your use of press releases will not pose a serious problem for you or your readers.

How to Get Press Releases

If you are a blogger, eventually you’ll likely find yourself on press release distribution lists whether you want to be or not. It simply comes with the territory of growing and finding an audience.

However, if you want to be on a list and you’re just starting out, the easiest way to get on them is to ask. Simply find the companies and organizations most relevant to your topic and then visit their press page. There, you should be able to find their press contact email, which you can write a short letter to asking to be put on their distribution list. It’s as simple as that.

If the company doesn’t have a press page, it may be possible they don’t actually send out any press releases. If so, look for a regular email newsletter that you can subscribe to, especially if it’s low volume. Failing that, you can always write the company directly and ask to be put on any distribution list they have.

All in all, the process should only take a few minutes and, if you’re smart about how you filter press releases, it shouldn’t be a major burden on your email. Best of all, getting on these lists can provide you with a great deal of external perspective to help make your future posts that much better.

In the end, there’s no reason to be scared of using press releases in your blogging. Though you need to be careful and mindful of the source of information, press releases can be a valuable tool to help you research and integrate additional viewpoints into your posts.

If used well, integrating press release content will actually help make your posts less biased and more fair than if you weren’t to include the viewpoint at all. The key is to simply be careful how you use the content and that you’re always honest about the source.

If you can do that, your readers will actually benefit from the inclusion of press release content and your site will be much stronger for it.