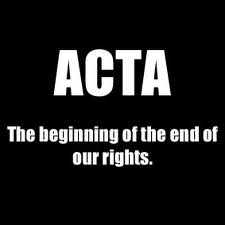 Several months ago President Obama signed the Anti-Counterfeiting Trade Agreement (ACTA) into law by decree of an executive order. While SOPA and PIPA turned the spotlight away from what the President calls a “matter of national security” various new petitions have circulated in which questions have been rightfully raised over the legality of the bills passing.

To circumvent a congress unlikely to pass the measure without public scrutiny President Obama signed an “executive agreement” which basically gives the President the ability to sign the treaty (by not calling it a treaty) while limiting the ability of the agreement to bind congress.

Currently circulating petitions in the meantime point out that executives agreements are only covered by things that fall solely under the President’s mandate, therefore an executive agreement that impacts the ability of Congress controlled items would be unconstitutional. Because intellectual property is protected under Article 1, Section 8 of the constitution along with Congresses responsibility to control such issue it would be an issue for Congress to discuss and pass or reject and not the President.

In the meantime the petition filed on the WhiteHouse.gov petition website has grown to more than 1000 people at this time while various other petitions have also circulated around the internet with thousands of signatures while asking that ACTA be stopped in the United States and in other countries where it has already or will soon be enacted.

In case you’re not familiar with ACTA here are a few of the main points of the treaty (see if SOPA and PIPA shine through to you):

” * * That ISPs have to proactively police copyright on user-contributed material. This means that it will be impossible to run a service like Flickr or YouTube or Blogger, since hiring enough lawyers to ensure that the mountain of material uploaded every second isn’t infringing will exceed any hope of profitability.

* * That ISPs have to cut off the Internet access of accused copyright infringers or face liability. This means that your entire family could be denied to the internet — and hence to civic participation, health information, education, communications, and their means of earning a living — if one member is accused of copyright infringement, without access to a trial or counsel.

* * That the whole world must adopt US-style “notice-and-takedown” rules that require ISPs to remove any material that is accused — again, without evidence or trial — of infringing copyright. This has proved a disaster in the US and other countries, where it provides an easy means of censoring material, just by accusing it of infringing copyright.

* * Mandatory prohibitions on breaking DRM, even if doing so for a lawful purpose (e.g., to make a work available to disabled people; for archival preservation; because you own the copyrighted work that is locked up with DRM)”

The White House has been slow to respond over criticism to the President’s handling of ACTA while protests have broken out in Polan as the country prepared to sign the bill at a meeting in Tokyo.

Do you think ACTA is just as bad as SOPA and PIPA?