Elena, a great designer friend of mine, has put out a new theme via Smashing Magazine called Dilectio and it is definitely interesting and visually appealing.
Here is some text from Smashing:

â€œOver the last year Elena, the creative mind behind Design Disease team, has designed a number of free WordPress themes, as the Smashing WordPress Theme we released as a present for our readers during our One-Year-Anniversary in September’07. Afterwards we’ve contacted Elena and asked if it’s possible to design another WordPress theme for our readers. Elena agreed.
After we’ve discussed the details of the design and the main aims we wanted to achieve, Elena started to do her magic. The result is a fresh, clean, user-friendly and playful WordPress theme â€œDilectioâ€ – a smashing Christmas present for Smashing Magazine readers.â€ 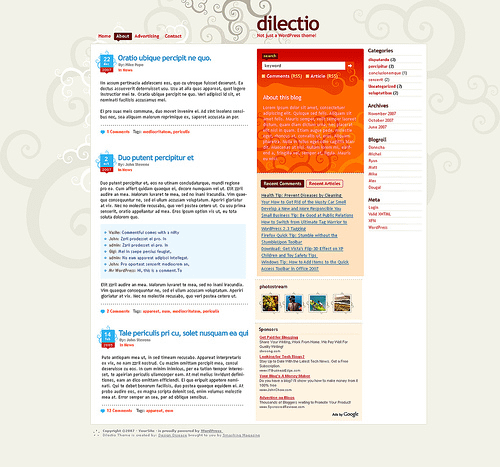 Grab it now from Smashing Magazine.