There, I said it. If you’re a serious blogger, proud of your blogging, you need an iPad.

Stop complaining about the lack of Flash because you’re off the mark. Don’t label the iPad as underwhelming without understanding the device, all while still being blinded by the pre-announcement Unicorn device hype.

Now the iPad has been unveiled we can accept its platform-changing role and look at how this device will change your routine. More than any smartphone before has.

There’s no way round it. Bite the bullet, shell out those $$$ and get your iPad. Here are more than seven reasons why you should get one. 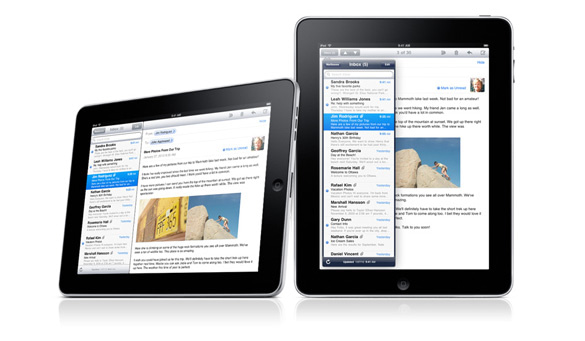 Once you have tasted and gotten used to a dual screen setup you will not want to return to a single monitor setup anymore. No laptop, or software, is good enough to replace the luxury of having two screens. Neither Spaces nor virtual desktops can anywhere nearly emulate the experience of two screens side-by-side. Bill Gates has three monitors, Al Gore loves to show off his ridiculous three 30″ screen setup. Once you get used to multiple screens there’s no way back. The iPad makes this now possible AND portable.

The iPad is the Perfect Research Device

A main part of writing an entry is often the research you need to do. Who doesn’t remember having had 10-to-tons of tabs open, researching facts, looking for quotes and so much more. With the iPad you can now do all this on a second screen, but instead of this screen being static in your desk setup, it’s portable. More than the iPhone even you can research anywhere – on the couch, at the kitchen table, on the road – all while having a nicely sized screen. Done having to squint your eyes on the small screen of your smartphone where content is resized to 320px.

The addition of ExposÃ© for Mobile Safari will only make your user experience and research more enjoyable. With copy and paste functionality it is easy to immediately transfer your quotes to Notes or even email them directly to your working computer. Alternatively you can use Pastebot for copy & paste functionality across your wireless network.

Your iPhone Apps Also Work on the iPad

The iPad will run almost all of the apps designed for the iPhone. You just download them from the App Store. Or, if you already have apps for your iPhone or iPod touch, you can sync them to iPad from your Mac or PC.

This means that you will NOT have to reinvest in applications you have already purchased for your iPhone or iPod Touch. If you already use WriteRoom or SimpleNote to sync your notes and drafts via the cloud, you can install these on your iPad. Just like any of the games you might have purchased to relax. Anyone fancy a game of Scrabble via the cloud?

The main advantage of using an iPad as a second screen instead of a monitor is that the iPad brings simplicity. We all know that as soon as you plug in a second monitor this one will be clouded with multiple windows: chat, email, media player. Move it all to the second screen but let’s keep the noise and distractions coming!

With no multi-tasking available (other than Push notifications) the iPad will help you focus on doing just your research, reading and even writing. Less is more. KISS!

Writing on the iPad you will be able to write in a clutter-free environment, without buttons and UI distraction. Focus on the important. Write. Use the iPad as your Microsoft Office 2007 minus the ugly, distracting ruler and other UI clutter. The UI is where Apple excels, you’ll love it once used to.

Update: Or in the words of Om Malik after the launch of the WordPress for iPad app:

In many ways, iPad’s lack of multi-tasking makes it worthy of focusing on just the task at hand. In my brief usage of the device at the time of the launch, I felt a near complete interaction with say an email or a document or a web page. Now that was near nirvana, when it came to consumption of content.

Apps Will Only Get Better

Darnell does a great job covering the many mobile blogging apps for the iPhone and although he will complain complains that the iPad has NO camera, he will enjoy all the awesome apps we will see for the iPad.

Many apps will take a new form and be developed whether for the iPhone/iPod Touch, whether for the iPad (or in two different versions). The new screen real estate will bring an ‘old form of multi-tasking’ back to your daily habits: side-by-side windows. While you are writing your draft, with or without keyboard, you will have the option to use the browser API and have on one half of the screen a browser window. Pretty much like Mac OS X users can do already with Scrivener as shown in the screenshot, this is coming to your lap, only 1.5lbs heavy.

Expect your entry previews to be loaded in a nice lightbox overlay, similar to the email drop-down in the first image in this entry.

The iPad is the Ultimate Relaxation Device

Last but not least, when you work hard you also need your time to relax. Read RSS, read a book, watch a movie on the go or play a game. After today some executives at Amazon and Sony PSP are cursing because Apple just released the sexiest book reader and portable gaming console.

Of course you will opt for the $30 unlimited data monthly pre-paid option. Now you can blog from anywhere and it is cheaper than buying an iPhone with an AT&T contract. Blog without squinting your eyes, cursing the keyboard (ever tried posting 1400 words from your iPhone, I have). More than that, iPhone OS 3.2 supports VOIP so you’ll be able to enjoy both Skype and Google Voice.

If you use software like Touchpad for iPhone the iPad will be the most enjoyable remote for your MacBook (Pro) and Mac Mini you’ll ever use, especially now with 802.11n.

As for the camera, let’s be honest. Do you want to be the moron recording video outside, holding a 10″ high tablet in your hands? I know I don’t.